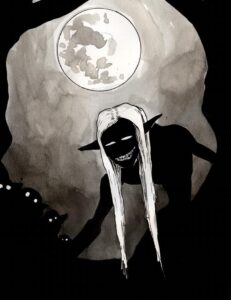 A name given to the return of magic and creatures thought lost since the Great War.

The supposed first instance of the Return was in 5677, in the small town of Raven’s Rift, somewhere out west. It’s an easy date to remember, it was the same year I was born. My mother never let me forget, odd little child that I was. She always cursed me and said I musta been born from a fey. If I was, I wish a little more of their magic had worn off on me. But anyways, that’s the first time magic was found to be back in the lands, in the infamous cycle known as my birth year. Now the wizards in Ish say their magic never left, and strange things have always wandered out of the Wastes, but it was 5677 when a young woman cast a spell in the town center of Raven’s Rift and started the whole thing.

For years after that more and more people showed their ability with what I, and others of tight arsed haughty education, call “the Arts”. Even with the strange new creatures plaguing the world, many in the world were happy, if not a little wary. News of the magic spread like wildfire, but there was no time to celebrate as soon after the shadows seemed to come alive and demons started crawling out of every cave and burrow. After that, travel and news dried up like the last bit of a beer on a warm day.

This phenomenon was renamed the Dark Return in 5683, right when I was starting to find I could light fires by saying funny words, or heal small animals with the right amount of humming and herbs. I knew it was not good to have the ability to do these things, so I hid it. Like most kids do with the toad they grabbed, I boxed it up and slid it into the recesses under my bed. The reason it was called the Dark Return is because it is when the whole Never seemed to burst open. The first ghuls poured forth from the Wastes. They were twisted creatures, bent on killing all that was found in their path. And then the giants came down from the mountains and stole whole herds to feed their ravenous appetites. After them all manner of beasts and foul monsters slithered out of every forest and field, and people grew scared. Of course, out of all of them, the greatest monsters were us. Once we started to find the power in magic, lines were drawn, flags were flown, and we went about killing each other to see who could put their flag in more places. While the soldiers and sorcerers fought in battlefields, the commoners had to deal with all manner of dark beasts making their already tough lives tougher. Luckily the Return Wars didn’t last long as there wasn’t much to fight for, and people fell into the new world of magic, demons, and fear.

It’s not all doom and gloom though. Some places have risen to try and help guide us through this unprecedented time. The Druids of Bordon and the Wizards of Eredar have started to recruit those who show ability in the Arts, thankfully finding me and whisking me away from a life as an odd farmer who others whisper about. Of course I became little more than a traveling rambler who spends more time scribbling in his journals than he does wiggling his fingers to make cantrips, but I don’t hold my mentors to that fault. Not that the world revolves around me, but thanks to the rulers of the large kingdoms who have made roads as safe as they can be, I get to do said rambling. And what were once divided city states are now banding together in rough alliances. There is safety in numbers, until there are enough numbers that someone wants to plant their flag on another’s lands. The elves have returned as well, though some see them as demons as much as the other Returned, but we have found that many of their kind have come to help and ally with Terians, as they like to call us.

So here we are, our world’s brief thirty years within the Dark Return summed up in a few badly written paragraphs, looking out into other troubling days. But maybe, just maybe if we have a bit of luck we can find a way back into those grand legendary days written about the past. Before a greedy king wanted to punish another king he felt was too popular and set off the whole world in a bloody “great” war. Maybe one day we can change its name back to the Return and just enjoy the magic that has returned to our world.

From the Journals of Aledyn, Druid