Ruled by region, sultans. Sultans are appointed from the military.  The military is the Vicaries.

The good: tolerant of religions, race, and culture. Gender equality

The bad: violent culture. Sports and entertainment are violence oriented. War is a cultural imperative. 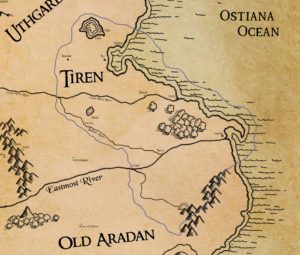 Tiren, the Kingdom of the rising sun, dominates the coastal region of the Eastlands. Its vast landscape is populated by many peoples, each governed as a small kingdom ruled by a militarily elected sultan.

The country is rich and its people live in comfort compared to some other regions. Engineering and mathematics are considered as holy as the gods, making cities and towns well designed, clean, and efficient. Laws are fair, but strict, with a constitutionally built judicial and punishment system.

Most of the people are of a darker brown complection, with dark straight hair. They favor light clothing made of silks and linen, though in winter furs and leather are common. The men favor a look with a long mustache, while women favor dark eye make ups and braided hair. All wear large wrapped fabric headpieces, often adorned with silver or gem jewelry.

The culture is healthy, as must have a balanced diet due to well established trade route throughout the realm.

Tyrians are also known for their sailing, and they trade all across Atheles.

This Kingdom has formed since the era of Aradan and is quite strong. It controls the access to the sea and has a brisk trade with the Far eastern lands.

Of note, the kingdom of Tiren is the only place in the east that a settlement of Elves live, though the exact location of this city is unknown. The small city is build among the cliffs and views the Inner Sea. This is in honor of Dalimar Gorfiriand, who led the elves against Kaldrath and helped lock him away. The prison was locked by the five Fengal Stones, one of which was given to Dalimar, who then went across the Inner Sea to safe guard the lands of the west.