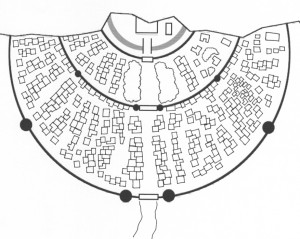 Guardian of the West, Bordon sits within the Swordspine mountains, keeping watch over the largest pass between the east and west. It is quite impressive to see first hand. Nestled in a valley, its brown walls stand over 150 feet tall and 30 feet wide at the base, pierced by a single entrance. The gates of Bordon stand 25 feet tall, and are made of the same stonework as the walls. Reliefs of battles fought and won are carved from top to bottom in the doors. The walls and much of the city were crafted by the dwarves of Greyhelm.

From Crossroads of the Never

Bordon was built mostly by the dwarves as a military city, guarding the passageway between East and West, so other than the artistry of those three stone tributes to ancient warriors that stand outside the gates, most of what you see is utilitarian in nature. There is very little that did not once serve some purpose. Many deride it for its lack of aesthetics, but I believe it tells us much about our ancestors. If nothing is built without purpose, then everything built can tell you something about its creators. There is a deep honesty in such practical masonry.

And yet, despite its plainness, its grandness is undeniable. Everything you see is massive in scale, as if built to house a civilization of giants. It is overwhelming, and can make a person feel small.

The most beautiful part of Bordon, however, is its incredible mountainous backdrop, which is the most gorgeous wonder of nature I’ve encountered. The gray mountains reach far into the sky, dotted and lined with trees that turn a multitude of colors in the fall. Creeks and waterfalls abound, winding their way through canyons and valleys. Natural springs sparkle in the sun and provide crystal clear water like none you have ever tasted. The highest white-capped peaks often stab through the thick, roiling clouds above.