The Orovari; The Dark Elves 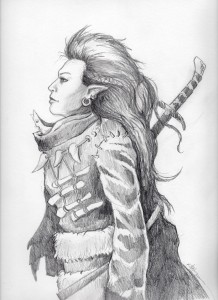 It is quite possible that the Orovari have suffered more hardships than any other elven culture. From their very beginning, they have been treated as nothing more than fodder for battles, and their worldview reflects this awful reality.

The Lands of the Orovari

The Orovari live in the frozen north, in what they call the Banished Lands. Twice they have been forced to live in these frozen lands: once after the defeat of Kaldrath, and once again after the defeat of the Warlock King seven centuries ago. They were kept isolated in the north by the elves in the distant past, and now by the Kingdom of Mideon, which maintains the Border Forts and regularly sends soldiers into the cold forests to ensure the elves do not attempt a southward migration. 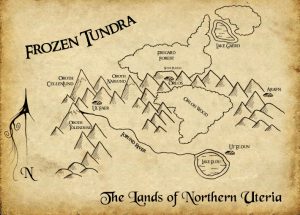 Currently, with the winters growing longer, the Border Forts have been hard-pressed in holding the Orovari back.

The ancestors of the Orovari filled the ranks of the Eldar armies. During centuries of warring over lands, titles, and position, the Eldar used the Orovari recklessly on the battlefields. They were trained as warriors from birth, males and females alike. This tradition is still evident today.

During the Time of Servitude, the Orovari were bred for their physical strength. They were forced into rigorous and deadly training to create the perfect warriors. In the beginning, the elves felt duty bound to create the perfect warrior in their fight against the remnants of Unhamil’s armies. The Orovari shouldered this responsibility with pride. As the monsters of Unhamil thinned in numbers, the Orovari were used as soldiers in disputes between the various Eldar realms. They had long forgotten that they had once had a choice, and were taught a code of honor that placed victory in battle above all else.

When Kaldrath opposed the Eldar, the Orovari deserted their overlords and flocked to Kaldrath’s banner. They had hoped to find a better life when Kaldrath freed the elves, but instead they found more violence, and ultimately, banishment.

The Orovari live in small clans which often clash with one another. Adding to the perpetual fighting are the orlocks, a little known race of creatures who inhabit the far north. The tough climate, violent culture, and strict religious views have kept the Orovari numbers relatively small. 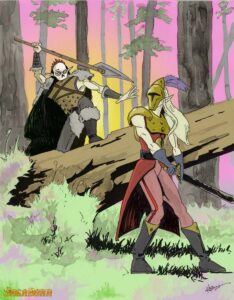 An Orovari clan is led by a council which consists of the strongest warriors. There are no rulers. Instead, disputes and disagreements are settled by the council court or by combat. Under the warrior caste are the farmers, who are treated well, but not with the respect of a warrior. Orovari may change caste in battle, and many have perished trying to gain status as an Orovari warrior.

The Orovari are known for their aggressive tactics in combat. I’ve discovered manuscripts from the Third Age which describe how Orovari warriors are trained from birth in the art of war—and nothing else. I wonder, though, how a society can survive with so much knowledge of battle and so little else. I believe the stories to be generally true, but perhaps embellished by the Orovari themselves in order to instill fear in their enemies.

Indeed, during the Aradan War, the Orovari used fear much to their advantage. They marched on the field in bold strides, wearing fierce masks and wielding their well-known long daggers. Most foes fell before them, but many ran from the battlefield. All might have been lost if not for the trained forces of Selar Dor.