Losvari – The Elves of the East 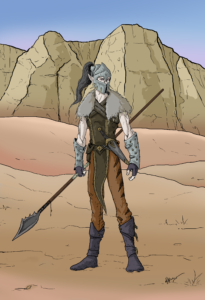 The Elves of Aradan were those who answered the call to defend the Aradan Kingdom from the northern forces of the sorcerous King Baleband. They signed a pact to defend the people of Aradan now and in the future against those who would oppose them. Members of each elven culture joined with the Aradani to try and halt the advancement of the forces of darkness from the North.

When the Disappearance happened, the Elves of Aradan became trapped in the most volatile part of the In-Between. They fought for their lives for centuries in these dream-like wastes. Now they have begun to return, sometimes violently, to the lands of Atheles.

They have adopted the name Losvari, meaning the “lost people”. 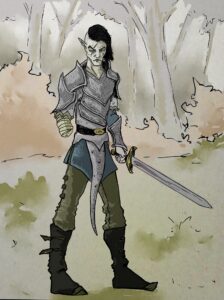 Ranariel, a Losvari elf who was captured by the Whirling Blades after he returned from the In-Between. He lost his arm in battle, but his foes have found he is just as deadly with his left hand.