Some in the city do not like the Baron aligning with the North. They have formed a resistance to this and protest in the streets. They mark houses and buildings with graffiti. They attack elves and other non humans. They have strong leadership and funding, but no one knows who pulls the strings.
When seen, they wear silver masks that look like demons, mimicking and ridiculing the masks that the Orovari wear.

A guild of morticians and embalmers.

They were very important to the city during the many plagues, as they disposed of the diseased bodies. Since then, they have continue to serve the cities in their time of grief, for the right price.

A small mercenary and guard company located in Kowal.

An Uthgard governmental body, it studies magic and licenses the ability to use it.

The Arcane Assembly mages are also called the Nulthari.

A newer gang of thieves and mercenaries, run by Geiron. They are more violent than the Companions, and actively clash with many of the other unlawful groups of Kowal. Their base is in the Squats.

They do not call themselves the “Red Dagger”, in fact Geiron hates the moniker, referring to himself and his followers as “family”. Hewas quoted as saying “A gang will knife each other in the back, their lot is less than a bag of shite. But a family, they are bound by blood. Those are the ones who look out for each other.”

The nickname was given to them from the city guard, as they left a trail of knife wounds and stabbings as they grew in power. While Geiron dislikes the name, the other members enjoy the fear such a violent symbol creates.

The Red Guard were formed from a faction of Kowal city guards loyal to a well respected guardsman named Damien. In the past 20 years, Damien has shaped the Red Guard into it’s own power within the city.

The Red Guard are strictly anti-magic and have lead hunts for magic users for the past 5 years, often ending in public executions.

Some feel the Red Guard are more powerful than the Baron in the current day, and the sight of their red armor sends many into a panic.

In the Fall of 5706, the building was destroyed in what has been named the Catastrophe of the Greystone. Many different stories, from an explosion to a giant demon are reported to have caused this. After its fall, the Red Guard were disbanded.

Kowal became part of the Uthgard Kingdom and the Ministry of the Arts took over the building and began to rebuild it.

The library of Kowal is many things to many people. It is a public repository of knowledge, free for citizens to peruse and read. It is the main printing press of the Eastlands, making books more readily available to all. And to a secret few, it is also a group that collects, catalogs, and experiments with magic.

The first floor of the Library hosts the public books, the printing press, and offices. The second floor holds the shelves of rare books and historical artifacts. Below that are the vaults and dormitories, their contents only known to the Society.

The Gathering of the Society

Twice a year, in a hidden level beneath the library of Kowal, a secret society meets to exchange knowledge, artifacts, and magic spells under the pretense of collecting histories. Their aim is to bring magic back to its former power, before its disappearance so many centuries ago, trusting this amount of power only to themselves.

Highly skilled treasure hunters in their employ scour the lands searching for traces of artifacts and ancient tomes, bringing back all they can find to be studied. If a book is deemed to have magical value, it is kept hidden below. If the book is of mundane value, it goes into the public library above.

But little do many of its members know, there is a level even deeper, where the books are not only studied, but experiments are conducted by a faction of Librarians committed not only to restoring magic, but advancing it. Their motto is to commit no harm, but their ambitions often rule, and little has been spared in the research into magic.

The Library of Kowal was formed by a group of monks who were once part of the Unelesia Church. As the church grew more rigid in their practices, the Library grew separated. As time went on, the Library became less and less involved in religious institutions.

About 500 years ago, while the world was yet reeling from the Great War, the Wanderers were formed in the city of Borden to help bring the people together again. They became known as saviors and heroes as they brought news, recovered old technology, and comforted people with hope for a greater good in a dark time. Now, the Wanderers still do much of the same, but as the lands have become less dangerous, they have started exploring deeper and deeper into the darker places of Uteria, bringing back horrifying tales and strange magical artifacts. 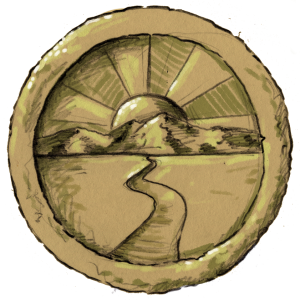 When a person is accepted into the Wanderers they receive the Wanderer’s Coin. This is shown at any Wanderer Guildhouse to gain access to a warm meal and a place to sleep.