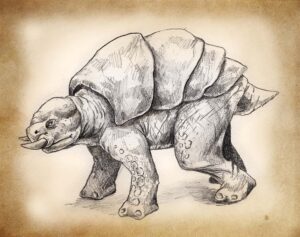 Orillots are large mammals used as domesticated animals in the warmer climates of Uteria. They are taller than a man, and have a rough leathery skin. Their backs are covered in large plates, resembling a tortoise’s shell, save that it is segmented. They have short tusks which protrude from the sides of their mouth, and their intelligent yellow eyes sit recessed on either side of its large head.

Though considered domesticated, they form a bond with their handler, and can be completely unmanageable by any but their accepted master. They have been used mainly for transportation, though in a few wars the Ishians have used them as battle mounts.

Most orillots are used to pull huge wagons or carry heavy loads upon their backs; however, in the lands near Ferryport, they are used to tow ships up the Aerlon River. Due to their large size, they are actually able to walk along the bottom of the river and tow boats and small ships directly upstream in the shallows near the river’s banks, instead of having to pull them diagonally from the shore, as horses must do.

Traveling the plains and deserts of the south as well as the Rivers near Ferryport, would be much more difficult, if not for the massive orillots, that serve their masters willingly, pulling giant wagons and caravans through the wastes and towing ships up rivers.