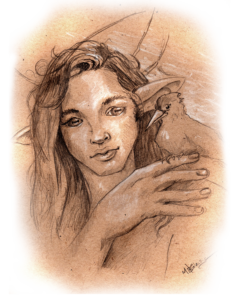 Every elfling is different, but there are some things that most elflings have in common. Most elflings that would become adventurers will be on their Calling, when they feel a need to explore the world. During the Calling, they have a very hard time staying in one place for very long, so a campaign based out of one location would give the player roleplaying opportunities to encourage the group to move, explore, or do anything other than stay in one place. If the campaign is located in a massive city like Seahaven, the elfling will be content enough to explore all the crevices and alleys of the city before wanting to move on.

Despite their size and tendency toward merriment, elflings should never merely be used as comic relief.  They see themselves as integral players in the game of living on Uteria and in the broader universe, and they are rarely petty.  Even when taking on the role of thief, an elfling would not be motivated by selfishness, but rather would see him or herself as an agent of the chaos of Creation. Often an elfling might steal from one to move it somewhere else where the victim might find it—just to watch the resulting confusion. This is serious business to an elfling.

But on the other side of the coin, they do have a great appreciation for jokes, gags, and laughs. This can sometimes annoy other party members, but their Charisma will usually help keep them wanted within a group environment. Their selflessness is also a boon for a party. They see no problem risking themselves for others, but this is not merely for heroics or morality. It is often simply a test of the mechanics of the universe, for which an elfling has endless curiosity.

If elflings travel with companions for a prolonged period of time, they will form a bond, seeing the group as their nomadic family: those who the universe set in motion with their own Calling. This can lead the elfling to do all they can to protect and help those within this bond. While this is endearing for companions, their propensity to get themselves in trouble can often swing the balance in the other direction. Having a bad understanding of (or distaste for) human laws of ownership and control, they often run afoul of constables and nobles.