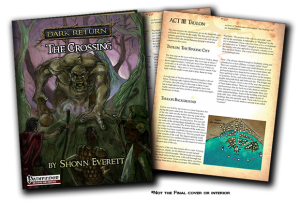 THE CROSSING is a new, Dark Return setting adventure for 4-6 characters of 3rd to 4th level. Continue your characters’ Return of the Fey adventure path with over one hundred pages of encounters, locales and terrifying monsters. Written by Shonn Everett and produced by the same team who have brought you so many great rulebooks, companion books and adventures over the last several years, THE CROSSING is a Pathfinder Roleplaying Game compatible (with a 5E, Shadow of the Demon Lord,  and SagaBorn conversion Guide) and will keep your party engaged in life or death struggles for session after session!

Merchant vessels have been disappearing on the river west of Ferryport. There are rumors of a river pirate, but when the adventurers investigate they will find far more behind the disappearances than the Guildmasters of Ferryport could ever have imagined. Deep within the Miragol Swamps, in a place of great power, lies a long forgotten tower where ancient secrets are being unearthed by a treacherous former lord of Ferryport. Under his command are foul creatures remembered only in ancient legends and folktales. Will the heroes uncover his plot in time to save the region from war?