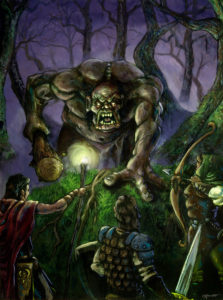 Delving deeper into the swamp, more and more things had begun to look rotten. Elistair said it was unnatural, and all got their weapons ready. As if on cue, the Varag emerged from the swamp, wielding a whole tree stump as a club.

Varags are twisted ogres who can ravage the nature around them to draw magical power, leaving behind a twisted and decaying world. They are just as powerful and savage in hand to hand combat as well.

This was the cover of the Pathfinder Adventure: The Crossing by Shonn Everett.

Michael Bielaczyc has been working professionally in the art field since 2001 when he founded Aradani Studios with his brother Paul. Together they have exhibited across America selling both their artwork and costuming. He works in many mediums from oil paint to latex prosthetics, video to graphite.

In 2012, Michael started Lone Wanderer Entertainment with his long time friend Dane Clark Collins to publish books based in their dark fantasy world – Atheles. Since then he has authored 4 books and created the SagaBorn RPG system.

You can see his complete work at www.michaelbielaczyc.com .